I Agree
How to Fight a Traffic Ticket in Idaho | IdahoCourtRecords.us
Idaho Court Records

How to Fight a Traffic Ticket in Idaho

In the State of Idaho, traffic tickets are issued to individuals who violate the state’s road-traffic laws. Also known as “uniform citations,” these tickets are generated by law enforcement officers, processed by the Magistrate Division of the District Court, and prosecuted by city or county attorneys. The information contained on these tickets includes:

An alleged offender who has received a ticket has two options: admit guilt and pay the fine or challenge the ticket and go to court. Recipients of a traffic ticket in Idaho may be subject to fines, court costs, jail time (for misdemeanor offenses), license suspensions, probation, community service, and other court-imposed sentences, including point assessments from the ITD. Additionally, traffic tickets can lead to a substantial increase in an offender’s auto insurance premiums.

Is it Worth it To Fight a Traffic Ticket in Idaho?

It will prove worth it to contest a traffic ticket in an Idaho Court if the ticketed party can prove that the ticket was issued in error or that they are innocent of the alleged offense. If the court rules in favor of the defendant, they may be absolved of all the financial implications (high fines, jail terms, license suspensions) that may result from a guilty conviction or plea.

In contesting a traffic ticket, the defense may negotiate a plea bargain with the prosecutor and get reduced charges, and if all else fails, the defendant may appeal the court’s decision within 42 days of a conviction. However, contesting a traffic ticket may prove far more expensive than the apparent alternative. This is because the defendant will be required to cover all the associated costs, including legal and court-related, associated with these actions. If the defendant is found guilty, offenders may incur even higher penalties. As such, defendants are advised to consult with an experienced Idaho traffic ticket attorney and weigh all available options before proceeding with a court case.

Ways to Fight a Traffic Ticket in Idaho

Traffic tickets are usually issued for an infraction or misdemeanor in Idaho. How a ticket is fought depends on the type of ticket. For traffic infractions, ticketed persons may contest a ticket by entering a not-guilty plea on or before the date stated on the ticket at the court clerk’s office. Some courts allow this plea to be sent in by mail, fax, or email. Whatever the case, the defendant will be furnished with a court date for a pretrial conference. The reason for this conference is to determine if a resolution can be met without a court trial. In infraction cases, defendants may hire legal representation or represent themselves, as the court does not appoint counsel for defendants in these cases, whether or not they are indigent, because the severest punishment is a fine.

Cases that cannot be resolved during the pretrial conference may proceed to trial. There is no right to a jury trial in an infraction case. Defendants who are found guilty are subject to fixed fines and costs established in the Idaho Supreme Court’s Infraction Penalty Schedule, as well as point assessments by the Idaho Transportation Department (ITD). Under § 18–113A, fine penalties for infractions cannot be reduced, increased, or suspended, and cannot exceed $300. If found not guilty, the case is dismissed. Persons who fail to appear will have a default judgment entered against them. Failure to pay the required fine results in 90-day license suspensions by the Idaho Department of Transportation (DOT). Suspended licenses can only be reinstated upon complete payment of the fine penalty and the DOT’s reinstatement fee.

Court appearances are mandatory for misdemeanor offenses such as reckless driving or fleeing/attempting to elude a peace officer, whether the offender intends to contest the ticket or not. This appearance may occur in the county where the offense occurred or in a county of the offender’s choosing upon request to the ticketing officer. Anyone who wants to contest a misdemeanor ticket may appear at the clerk’s office on/before the appearance date indicated on the ticket and enter a not-guilty plea. Offenders also have the right to enter pleas before the court. However, if the case was initially transferred to another county, it may be returned to the original county for the trial upon entry of a not-guilty plea.

Persons who fail to appear on their specified court date may have warrants issued for their arrests and bail set forth as directed in the Idaho Misdemeanor Criminal Rules (IMCR). Inability to post bail results in imprisonment. After entry of a not-guilty plea, a trial date is scheduled by the court, and a notice is issued to the defendant. A judge or jury may hear this trial, and the defendant has the right to counsel. The court may appoint an attorney for a defendant if the offense has a possible prison sentence or if the conviction of the offense could result in a subsequent misdemeanor conviction being penalized as a felony. Penalties for guilty convictions include fines, community services, court costs, incarceration, license suspensions, victim restitution, and probation.

How to Fight a Traffic Ticket Without Going to Court

Unfortunately, there is no way to fight an Idaho traffic ticket without going to court. Ticketed road users are required to appear in court to contest infractions or misdemeanors. However, Rule 5(d), IMCR, and Rule 6(d) Idaho Infraction Rules (IIR) allow an attorney to appear in place of a defendant, no matter the offense, unless the court requires the defendant’s presence.

How do You Get a Traffic Ticket Reduced in Idaho

In Idaho, fines for traffic infractions, whether incurred upon entry of a guilty plea or entry of a judgment after a trial, cannot be reduced or suspended. A defendant may establish a payment plan or agreement with the court via the clerk of court’s office for any infraction fine, surcharge, or extra court cost. There is an agreement form designed by the court for this purpose, which must be signed by the defendant and court for any payment agreement to be in effect. Failure to comply with an agreement can result in a person’s arrest. A payment agreement form is also available for misdemeanor convictions. Also, a convicted party can request community service in place of fine payments for misdemeanor offenses.

Can you Get a Speeding Ticket Dismissed in Idaho?

No. While some US states dismiss traffic tickets if the offender agrees to certain programs e.g. participating in a driver improvement course, the option for dismissals does not apply to traffic offenders in Idaho. The court will only dismiss an Idaho traffic infraction upon entry of a not-guilty verdict or per Rules 60(a) and (b), Idaho Rules of Civil Procedure (IRCP). Otherwise, these tickets cannot be dismissed.

Anyone who pleads guilty to a traffic ticket in Idaho is liable to the following penalties:

How to Find a Traffic Ticket Attorney in Idaho

An experienced Idaho traffic attorney’s assistance is invaluable when contesting a traffic ticket to reduce or dismiss charges. The Idaho State Bar offers online services to members of the public who want to find traffic attorneys or require suitable referrals. Also, individuals who cannot afford an attorney may check if they qualify for legal representation through the Idaho Volunteer Lawyers Program. 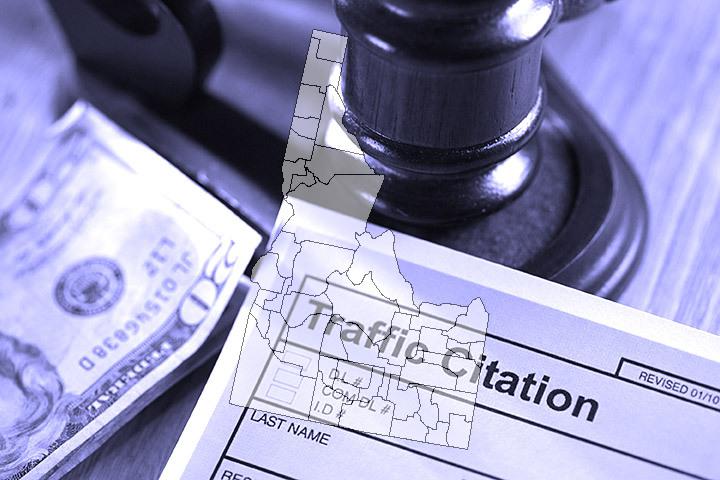