I Agree
What is a DUI and DWI in Idaho? | IdahoCourtRecords.us
Idaho Court Records

What is a DUI and a DWI in Idaho?

The State of Idaho refers to the act of driving or having control of a vehicle while impaired by any substance as Driving Under the Influence (DUI). The term DWI (Driving While Intoxicated) is not used in the state; neither are there laws for DWI offenses. Idaho’s DUI laws are outlined under Chapter 80, Title 18, Idaho Code. Per the law, it is illegal for any person to be in actual physical control of a vehicle (as defined by Idaho Code 18–8002A(a)) if:

The Magistrate Division of the District Courts hears DUI cases in Idaho. Because DUI offenses are classified as moving violations, the Idaho Transportation Department (ITD) is also authorized to penalize offending drivers. From these agencies, DUI offenders can incur license suspensions, fines, and jail sentences. In instances where substance abuse is a factor, such persons may be recommended to a DUI Court or Misdemeanor/DUI Court for treatment following Chapter 56, Title 19, Idaho Code.

The legal term for alcohol/drug-impaired driving offenses in Idaho is Driving Under the Influence (DUI). All U.S. States regard these offenses as severe because they not only compromise highway safety but can result in loss of life or permanent bodily injury. Therefore, in certain states, Driving While Intoxicated (DWI) refers to the more criminal offenses and DUI, the lesser offenses. Idaho law, however, does not make this distinction. Rather, the law punishes offenders for Aggravated DUIs and Excessive Alcohol Concentration (BAC levels of.20% or higher) DUIs.

What happens when you get a DUI for the First Time in Idaho?

In Idaho, a first-time DUI offender is charged with a misdemeanor and prosecuted as described under state law. Typically, a person is arrested for a DUI if pulled over by a law enforcement officer and the BAC test taken reveals illegal alcohol concentrations, or if found to be under the influence of drugs or other intoxicating substances. Possible penalties for a first conviction include fines, driver license suspensions, incarceration, substance abuse treatment, probation, and community service. These penalties vary if the offender is a certain age, has a particular BAC, or is a commercial driver:

In addition to court costs and surcharges, an individual convicted of a first-time DUI offense may incur legal/attorney, auto insurance, bail, license reinstatement (usually $285 for regular drivers and $85 for commercial drivers), and treatment course fees, among others.

How Likely is Jail Time After a First DUI in Idaho?

Very likely. According to Idaho Code 18–8005(1)(a), a DUI offense may result in a jail sentence, whether for a first or further offense. A first offense committed by a person who is 21 years and older with a BAC of.08% or higher can lead to 6 months in confinement or less (there is no minimum jail sentence). Whereas first convictions with a BAC of.20% or more have a minimum jail sentence of 10 days and a maximum of 1 year. Individuals who are below 21 years of age, with a BAC of at least.02% but not over.08%, are not subject to a term of imprisonment unless it is for a subsequent offense. All other second or subsequent offenses result in jail time in Idaho.

What are the Typical Penalties for a DUI Conviction in Idaho?

When the offender is not up to 21 years, that person will be prosecuted under Idaho Code 18–8004A(2) for a misdemeanor. Legal punishment may include a fine not below $500 and above $2,000, jail sentence up to 30 days and not less than five days, license suspension not exceeding two years (1 year of which is absolute and cannot be reduced), alcohol evaluation, and a compulsory ignition interlock device.

An individual who has not reached 21 years of age will incur penalties such as a jail sentence not below ten days and not above six months, a fine of $1,000 (minimum) and $2,000 (maximum), confiscation of driver’s license/permit, suspension of license for a minimum of 1 year, alcohol evaluation, and the compulsory installation of an ignition interlock system on the offender’s vehicle per Idaho Code 18–8008.

Finally, any person convicted of a DUI offense must obtain an alcohol evaluation (Idaho Code 18–8005(11)) before sentencing. The cost of such evaluation may be incurred by the offender or county following Chapter 34 and 35, Title 31, Idaho Code. At the court’s discretion, a first-time offender for a regular DUI may have this requirement waived if the person has no previous or outstanding charges and there is no evidence of habitual substance abuse. Defendants who do not submit a copy of their concluded evaluation will be sentenced with the assumption that treatment is needed unless the offender can provide contrary evidence. Nevertheless, the court may regard such an act as an aggravating factor when deciding sentencing if the offender did not make reasonable efforts to obtain an evaluation.

Idaho has plea bargaining options for DUI offenders. Based on the nature of an offense, an offender may be able to reduce a DUI to a slighter offense like reckless driving, and in turn, lessen the resulting penalties.

How Long Does a DUI Stay on Your Record in Idaho?

In Idaho, DUI convictions remain on an individual’s record for a lifetime. Usually, this record cannot be sealed or expunged by a court. However, it may be possible to seal records in cases where the offense was pleaded to a lesser charge, and the court withheld adjudication (ordered probation rather than conviction). Unlike an expungement, sealing a record conceals a person’s record only; it does not remove the conviction from the record.

Records that are considered public may be accessible from some third-party websites. These websites often make searching simpler, as they are not limited by geographic location, and search engines on these sites may help when starting a search for specific or multiple records. To begin using such a search engine on a third-party or government website, interested parties usually must provide:

How do I Find DUI Checkpoints in Idaho?

DUI checkpoints, or sobriety checkpoints, are not recognized by Idaho law. Law enforcement officers are not authorized to set up roadblocks to access the inebriation rate of drivers in the state.

Which is Worse: a DUI or DWI?

Idaho does not have Driving While Intoxicated (DWI) laws. The state refers to impaired driving violations as Driving Under the Influence (DUIs), and offenders are penalized according to the DUI laws.

What is an Aggravated DWI in Idaho?

As stated above, Idaho’s laws for intoxicated driving are called DUI laws. As such, there are no DWI or aggravated DWI laws in the state. Instead, a person can be convicted for an aggravated DUI under Idaho Code 18–8006. According to this law, an aggravated DUI offense is defined as a DUI offense involving significant bodily harm or permanent disability/disfigurement to another human being. The punishment for this felonious act includes:

What Happens When You Get a DWI in Idaho?

An individual can only be convicted of a DUI offense in Idaho because DWI laws do not exist. Generally, such a person will be prosecuted under the DUI laws. Furthermore, by the state’s Implied Consent law, every driver is required to undergo or complete a BAC testing if pulled over by a law enforcement officer for suspected drunk or intoxicated driving. Failure to obey this law can lead to a fine of $250, a compulsory ignition interlock device for a year, and the offender may need to attend a BAC hearing. The court may also suspend that person’s driver’s license for one year upon the first refusal and two years upon a second refusal within ten years of the former. 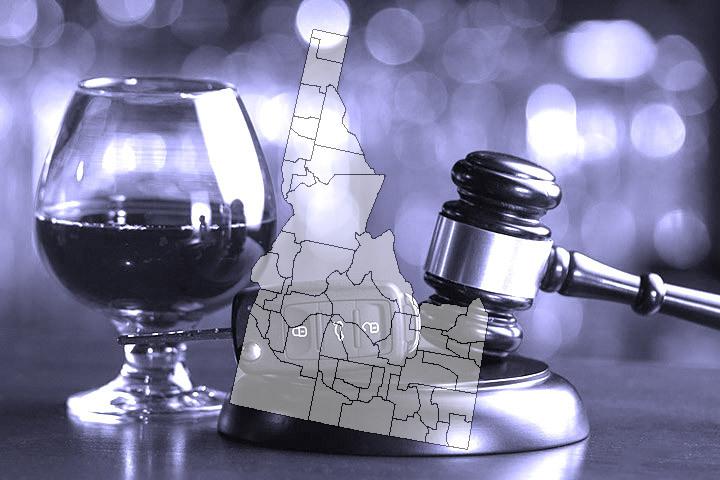